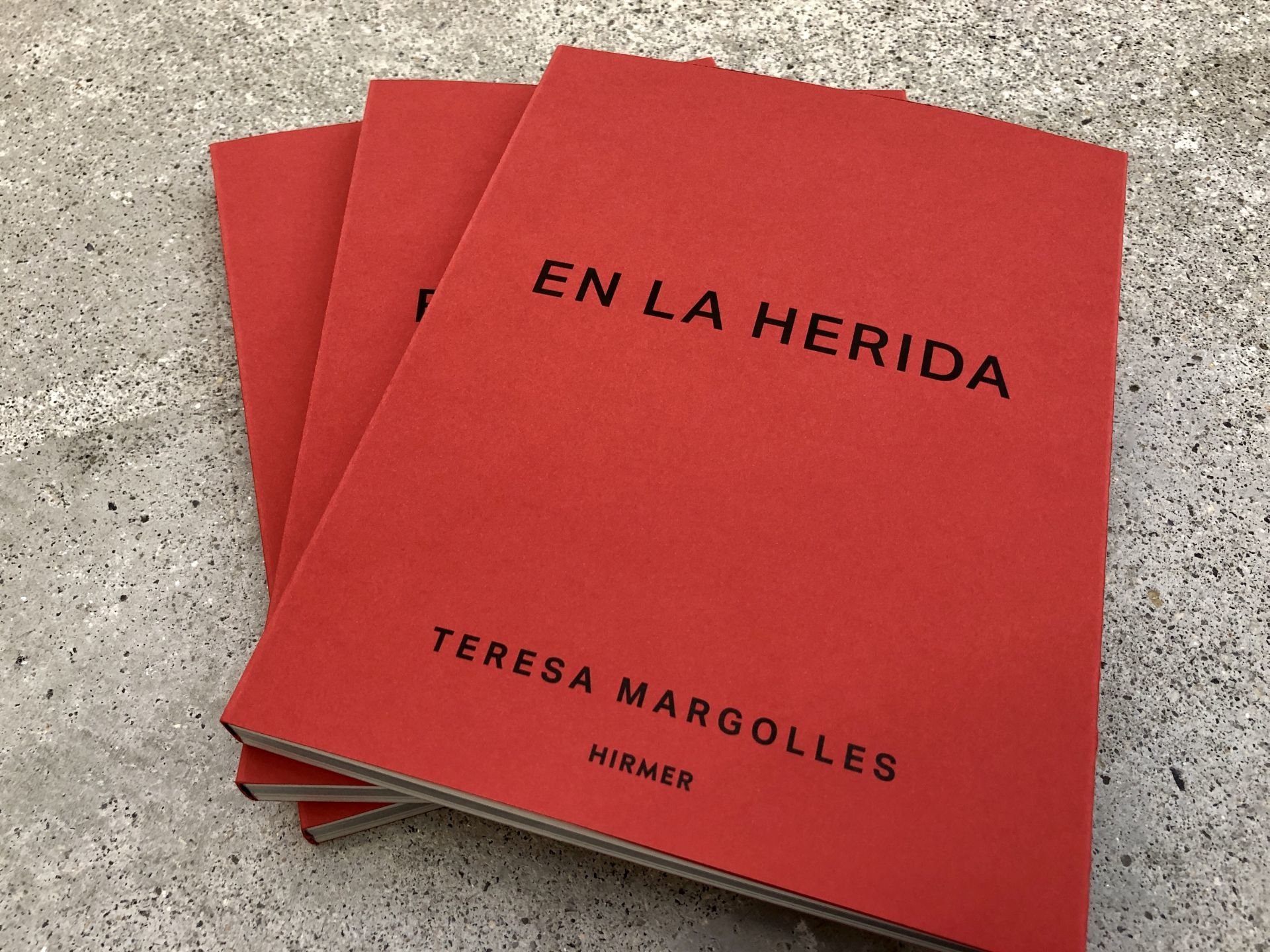 Art is a laboratory where experiments are conducted

that shape thought into visual and imaginative ways of framing the pain points of a culture.

How is contemporary art a product of, or a driving impulse on, history? How does it reflect the society it is created in, or how does it in influence our perception of the world and our interaction with it, informing our worldview at large?

In its totality, the work of Teresa Margolles presents itself as a phnomenology of modern society. The artist addresses a diversity of subjects in her work with relentless realism. These include violence, death (mostly in connection with the drug trade), migration, social injustice, gender discrimination, and corruption in the political and legal system. Margolles speaks to these topics, for example, in the following works: Muro baleado (2009), a stretch of concrete brick wall riddled with bullet holes. It bears witness to rampant everyday violence in the Mexican city of Culiacán where fighting between federal police and drug cartels is particularly intense and merciless. The documentary photo series “Pistas de Baile” (2016) shows transgender prostitutes standing on what once were the dance floors of now demolished nightclubs in Ciudad Juárez. The installation La Gran América (2017) is a memorial to the nameless migrants who died trying to cross the border between Mexico and the U.S. Margolles had small clay tiles made from mud from the river bank of the Rio Grande (the last piece of land that the migrants saw on their way to the “American dream”); each of them is unique and stands for one life that was lost and deserves not to be forgotten. Margolles’s works cast light on these social phenomena and reach out beyond the context of their origin in that they take on universal significance and contribute to critical thinking on the matter in the general public. The result is a “visual sociology” that aims to sensitize society and heighten public awareness in general.

Margolles removes any distance between art and reality, between aesthetics and social significance in her works and documents topical events using simple but highly suggestive materials. Her work moves out beyond the perspective of official historiography for there is no analytic processing of facts going on here: instead, the artist documents her present time and, in a kind of artistic variation of nota roja2, draws a brutal, direct and immediate picture of events as they are happening.

Margolles’s art is conceptual. Over the years, she has inspired thought and contemplation in her audience with ever more minimalist poetry, eventually leading to an aesthetic of absence and negation that consists of indications, references, allusions, traces, and signs.

The thread that runs through Teresa Margolles’s artwork, which started out in the 1990s with the SEMEFO (Servicio Médico Forense)3 artist collective founded by her and became more independent over time, is “la vida del cadaver” (the life of the corpse).4 In her works, the social body becomes the social corpse: once autopsied, the dead bodies take on a new meaning beyond the private and thus become objects of common interest. Margolles goes against the trend of Western industrial society, which is desperate to get disease and death under control and has a tendency to shut these two aspects of life away in institutions like hospitals, nursing homes, and morgues.5 Modern humankind has drawn a line of separation between the safe world of the healthy and that of the sick and dead. It has expelled death from everyday reality because it marks the point at which human control over life reaches its limit.6 The dead body symbolizes death itself that contaminates life and, according to Julia Kristeva, triggers abjection, that feeling of profound discomfort caused by the sight of a dead body.7 The dead body poses a danger to those remaining behind because of the notion of “infection” that is associated with the decomposition of the flesh; it is the source of a frightening aggressive power that gives a sense of impending doom. What also comes into play here is the concept of obscenity as an imbalance that shatters the condition of the body, the state of being the master of one’s own existence, of one’s own firm and consistent individuality.8 Death is the destruction of the transient human being and the advent of the negation of continued individual existence. Consumer culture has familiarized us with the concept of the “self-conservation” of the body: the human individual takes measures to combat the decline of the body due to diseases and the sheer passage of time. In this meaning, death functions as an extreme driver of change and as such, it becomes a taboo subject.

With her works, Teresa Margolles breaks through and crosses the boundary between life and death, between the private and the public sphere, between what happens inside the body and what it looks like on the outside. She shows what otherwise is not accessible but hidden: whoever views her works is potentially exposed to contamination by decaying flesh, as any distance to death is gone. Through this intimate closeness to the dead bodies, the artist aims to put viewers in a state of visceral shock that is supposed to give rise to profound personal and social questions. The confrontation with death triggers conflicting feelings and bodily reactions: a constant tension between horror and beauty, fear and fascination, repulsion and attraction. The tension arises because death means a loss of control over our existence and puts before our eyes the transience of human life and our inevitable destiny as mortal beings. As Georges Bataille put it: the corpse inspires awe because it is the image of our own destiny bearing witness to a violence that destroys not one human alone but all of humankind in the end.

With her artwork, Teresa Margolles also debunks another widespread notion: the idea of death as the great equalizer. Applying a personal poetics of grief that uses a wide variety of expressions (like photography, sculpture, installation, performance, and video), the artist examines and illustrates for her audience how social and economic inequality continues to exist even after death. Many of the dead bodies she uses are nameless, nobody has claimed them, and in as many cases, the families cannot afford a funeral, and most of them fell victim to crime because of the socially disadvantaged milieu they were living in.

As said before, contact with dead bodies or parts of them is crass and direct in Margolles’s earlier works,9 while the body is altogether absent from her later pieces, withdrawn from the sight of viewers10. In line with considerations proposed by Jean Baudrillard11 and Byung-Chul Han12, the Mexican artist, in her most recent work, makes the point that the sublime is no longer enough and that what is needed is the “subtle”: withdrawal generates power, from absence grows intensity, overvisibility blinds the gaze. In the era of images that leave no room for individual imagination, and of the hyperreal virtual dimension, which tends toward nihilism with the perfect illusions it delivers, abstraction becomes the greatest adventure in modern art. To escape the banality and hazards of an unreal simulation without meaning and aesthetics, the unseen must be preserved. And along these lines, the symbolic objects that Margolles uses in her works have to be understood as being “secular relics” and not as the “readymadeness” or fetishization of individual objects because otherwise there would be a danger of an excess of reality.

To conclude, the art of Teresa Margolles can be described as being equally documentary and militant; she is in a position to direct public attention to specific social problems, and in so doing, to move beyond the boundaries of passive lamentation. Her works are a form of active fighting and propaganda with the goal of influencing and sensitizing the general public and prompting critical and conscious collective thought and action. And to answer the question from the opening of this text: the art of Margolles can be rightfully described as being both a product and a driving force of contemporary society.

1 Ernst van Alphen, Art in Mind: How Contemporary Images Shape Thought (Chicago, 2005). 2 Nota roja is a popular journalism genre in Mexico whose coverage almost exclusively focuses on death and violence in connection with crime, accidents, and natural disasters. 3 Teresa Margolles is not only a world-famous artist but also a trained forensic medical examiner. 4 Cf. Julia Banwell, Teresa Margolles and the Aesthetics of Death (Cardi , 2015). 5 Cf. Claudio Lomnitz, Death and the Idea of Mexico (New York, 2005). 6 Cf. Anthony Giddens, Modernity and Self-Identity: Self and Society in the Late Modern Age (Cambridge, 1991). 7 Cf. Julia Kristeva,Powers of Horror: An Essay on Abjection (New York, 1982). 8 Cf. Georges Bataille, Erotism: Death & Sensuality (New York, 1962). 9 Examples of works involving the direct presentation of parts of dead bodies are Tatuajes (1996), a collection of patches of tattooed skin of dead prison inmates, and Lengua (2000), a human tongue with a piercing on a little metal stand. 10 The most recent and most typical work of this type is Tela sumergida en pozo de un chircal de Juan Frío (2019). The photograph shows a cloth stained with fluids from the dead body of a person killed on the border between Colombia and Venezuela being dipped in a dug-out hole filled with muddy water. 11 Cf. Jean Baudrillard, The Conspiracy of Art: Manifestos, Interviews, Essays (New York, 2005). 12 Cf. Byung-Chul Han, The Transparency Society (Stanford, 2015).