Francesco Di Giovanni, together with Marta Ciolkowska, join me at Fruit Exhibition where I have just finished my presentation of the catalog 'Vedo a Colori. Street Art al Porto vol. II' alongside Giulio Vesprini (creator of the project).

A really lucky meeting! it is the first handshake after a period of virtual friendship on Facebook.

I've been immediately impressed by the presentation of his format 'The Relocation' for the originality of the idea, form and content.

This is how our artistic journey together began, sealed in autumn 2019 by  'The Flag Relocation' (a video plus a sequence of 7 shots) - the first project  together - presented in several locations thanks to the collaboration with Maria Livia Brunelli Home Gallery and Fondazione Sandretto Re Rebaudengo.

I am, therefore, very happy to give voice here to his thoughts on the themes proposed by my blog.

As a scholar as well as an artist, he proposes an in-depth analysis of the relationship between contemporary art and geopolitics. 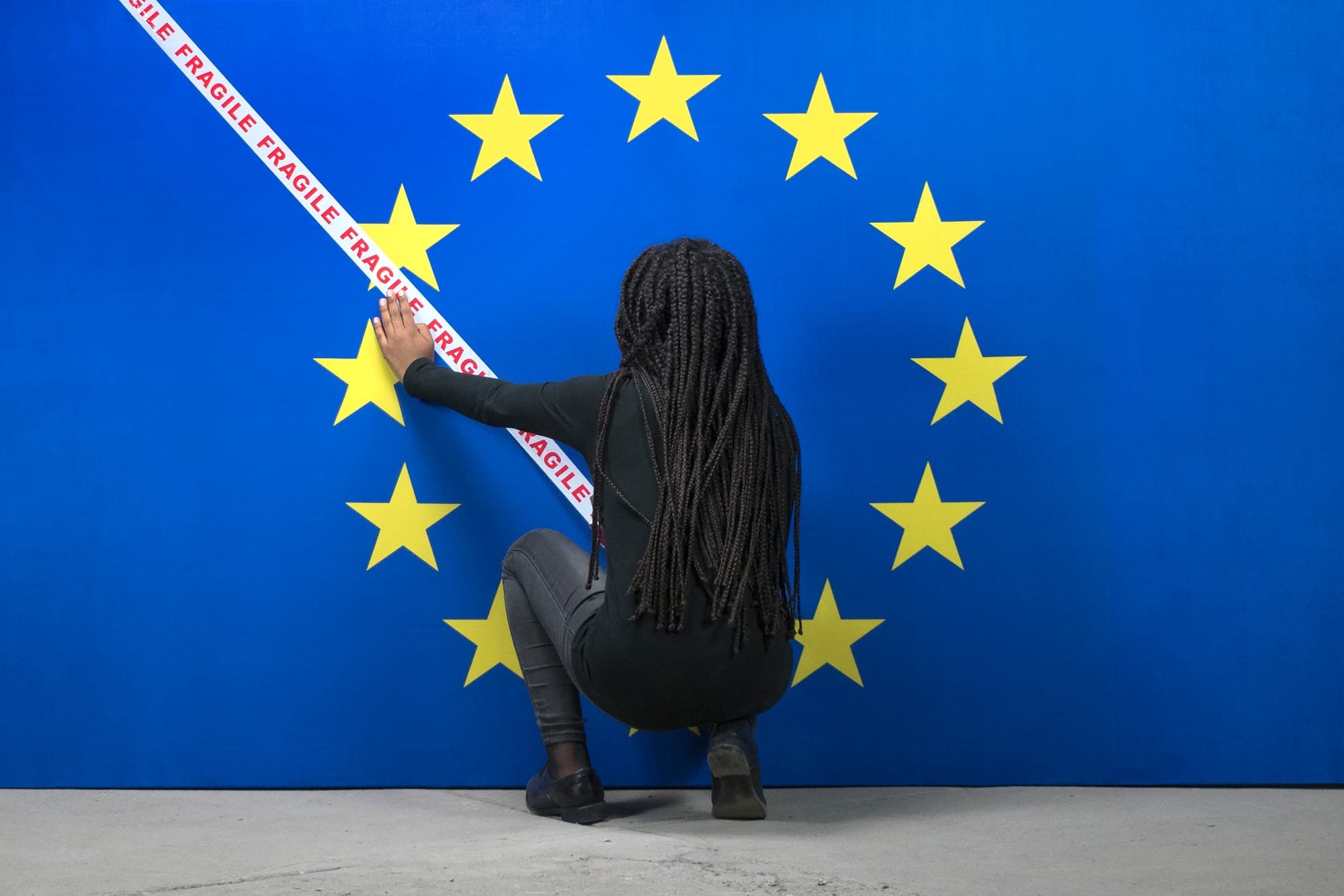 Geopolitics, understood as the possibility of understanding and resolving the complex relationships that interconnect the globalized world in authoritative ways, appears to be a recent discipline but, if it is not considered as the heritage of a political doctrine, of an academic discipline or of a specific historical period, it appears as a perennial analytical dynamic. It has always existed! It will cease only with the end of the human species.

This is the reason why Geopolitics today is full of history, more than permeated by geography. Although it deals with phenomena linked to actions regarding peoples and political trends undertaken by governments, we still ignore a univocal definition to identify it, but it seems incontrovertible the assumption that a shrewd knowledge of the past is essential to formulate geopolitical strategies aimed at the future.

Having completed the necessary premises, art has always had the task of "saving" reality by reviving the singularity of places and people. Art (perhaps unknowingly) has been constantly close to geopolitics, considering how different artistic operations and multiple movements have shaken, over the years, entire populations and nations. On the other hand, political events have also caused the proliferation of artistic operations, mobilizations and protests, for example occupations and boycott actions are ways that use the art world as a strategic space of experimentation for political discussion. Groups such as Gulf Labor and Liberata Tate, through their disruptive action, demonstrate against the exploitation of labour, the misuse of a public space, climate injustices and other various and pressing issues.

Artists now appear more aware and integrated and are sensitizing the public towards all forms of epistemic (or symbolic, to define it with Pierre Bourdieu) and physical violence committed within places of cultural and artistic production. Their commitment is aimed at re-establishing contact with real politics in order to investigate and denounce new forms of exploitation.

Also within my personal series of works entitled "The Relocation", Geopolitics finds its space. "The Relocation" is composed of a series of interventions that employ various mediums and places, the relocation becomes an artistic practice, which uses the metaphor of moving. Each relocation, therefore, is a transfer, a displacement, even semantic. An extrapolation, a reconfiguration. A way to say something despite having thought something completely different. A philosophy of relocation is a philosophy of positioning, insofar as this is to be understood as repositioning, a positioning elsewhere than here, and where neither the elsewhere nor the here are necessarily known. 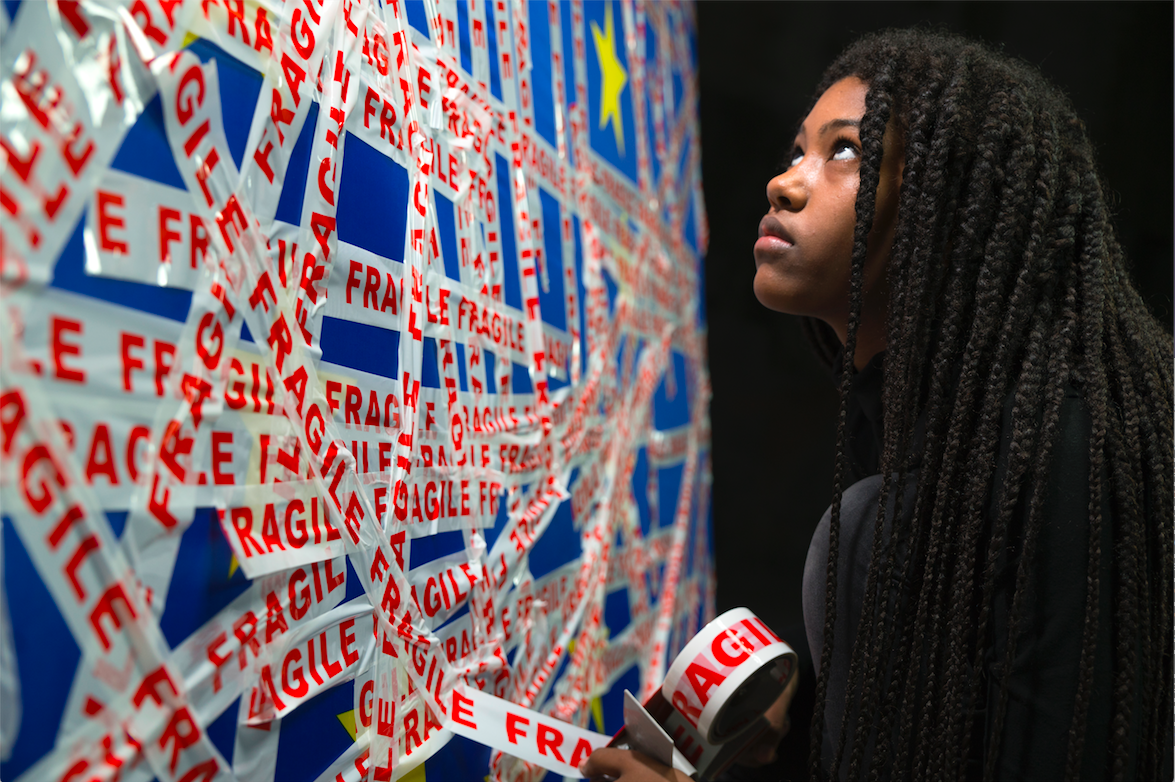 One of the most recent interventions that see relocation as an action of transfer of the individual and his social and cultural context, is undoubtedly "The Flag Relocation", which I summarize through an excerpt from the text by Maria Chiara Wang, published in the catalog published by Skira on the exhibition "From Guarene to Etna" organized by the Fondazione Sandretto Re Rebaudengo: The Flag Relocation is the last chapter of Francesco Di Giovanni's artistic research founded on the theme of relocation. Thanks to the metaphor of relocation, extended over the years to different areas and contexts, the artist becomes the spokesman of a philosophy of MIGRATION argued visually through the production of heterogeneous media such as: performance, photography, video and installations. The 'fragile' ribbon, with which a young Eritrean girl packs the European flag, is used here to hold together and protect the elements that make up a community sometimes undermined in its unity and stability. The only star that remains visible represents the anchor of salvation to which little Sami has clung to begin a new life. 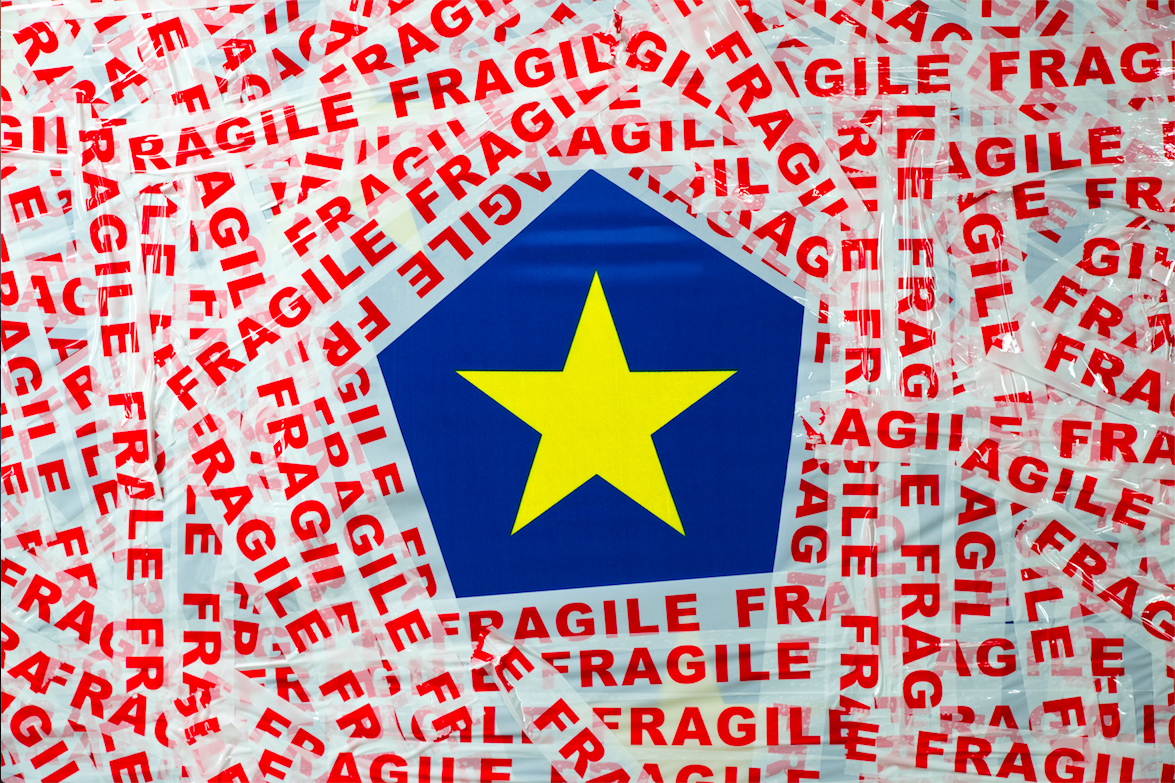 Geopolitics, among its concepts, deals with investigating and analyzing migratory flows, which is why I believe that my artistic practice, in continuous mutation, can be configured as metamorphosis and evolution of the individual, allowing the connection between people, making them participate in collaboration and cooperation to achieve a common goal, to continue to survive and endure over time.

Moreover, with "The Gallery Relocation" (the moving of an entire gallery) and "The Management Relocation" (the moving of a museum director together with his office), the spaces in which the art system "moves" are examined, with the peculiarities and flaws that continue to characterize it even in the modern era. Artists move around, galleries open or close spaces in the world, fairs, in continuous growth, trigger the proliferation of a market whose goal is to reach the auction houses or relevant collectors, and all this seems to set art in a landscape increasingly cumbersome, aggressive and difficult to manage through certain parameters. The Geopolitics of art must increasingly configure itself as a clear possibility to predict and analyze future events through analysis of spatial contexts and social behaviors that allow to find articulated answers to complex phenomena of the global world.